In the land of America’s heart

Through the magic of social media, I got connected to an old friend from my high school days this week. She is a middle school English teacher in Jasper, Indiana and has been living there for nearly thirty years. Jasper is a small town not far from Vincennes, another small town where my friend and I lived during our illustrious high school careers.

People from Jasper love their famously German town. My friend wrote in our exchange that she “couldn’t see life anyplace else.” That’s quite an endorsement of a small town these days, yet familiar sounding to me from others I know who call Jasper home.

She comes from a family of educators, and I have no idea what their political leanings might be, but I know which party dominates that part of the state: the GOP.

The night before my Facebook flashback, I shared a news item about a public meeting that took place on the south side of my adopted hometown, Indianapolis. The topic of the meeting was educating the community in Perry Township about the Burmese refugee population that has settled in the area in recent years. Long time residents needed to learn some things about the refugee program itself, but of equal importance, some things about Burmese culture.

Southport Police Chief Thomas Vaughn and Lun Pieper, a Marion County deputy prosecutor were invited to share information at the meeting. Pieper is of Burmese decent. Chief Vaughn has been working with the Burmese refugee community there for a couple of years and saw this as an opportunity to expand their community outreach.

A local Republican commented on my Facebook page that he has Burmese refugees living in his neighborhood, that they are “good honest people” and “he is glad the conversation is happening.”

It was also with great pleasure that I read an editorial written by Adam Burtner this week in the Wabash College newspaper, titled “Why I Marched.” No, I didn’t go to Wabash. My son does.

To give you a sense of what Burtner covered in his piece about last week’s women’s march, he wrote: “I’ll be damned if I can’t stand by their side and show my support as they fight for equality. That’s why I marched.” This is coming from an active Young Republican. He is serious about being a Republican, but clearly thoughtful about what that truly means to him.

This is America’s heartland.

We are kinder to and care about each other far more than we realize sometimes. There is no church, neighborhood or region that has the market cornered on the sensitivity our culture has toward all humanity. It sometimes gets clouded with politics or abhorrent crises that cause us to start conversations with fear and anger, but the goodness within our souls is in there.

It would be easy to read commentary, Twitter rants, and even suspicious defenses of our new leader’s fear-based moves of his first week in office and conclude that we are not a caring people. But that is not who we are. We do care about people. And openly expressing it is nothing to be afraid of.

While day dreaming about writing this column yesterday, I got stopped at a traffic light next to this truck. 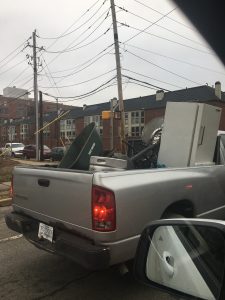 I looked over at it and my mind exploded into all of the possible stories the driver might tell. In his truck bed, he is visibly hauling an old frig, an outdoor patio heat lamp, a wheel barrow and a keg. It was 10:00 on a Saturday morning. Was he coming or going? I thought about following him for a minute to see if I could just blend into whatever he had in store.

Maybe if I lived in a smaller town, I would have known what some of that story was.

Which brings me back to Jasper.

The small town probably went about its business on Friday. Friday was also International Holocaust Remembrance Day. In a painfully ironic move, our new president announced his intention to close our border to certain middle eastern refugees the same day.

For many of my friends from Jasper, they might just as well have been driving that truck to the other side of the globe to help a neighbor. In retrospect, I wish I had followed it.

I am glad my old friend reached out. It was a pleasant surprise. But it shouldn’t have been. We reach out to each other a lot in the Heartland. That actually is who we are.