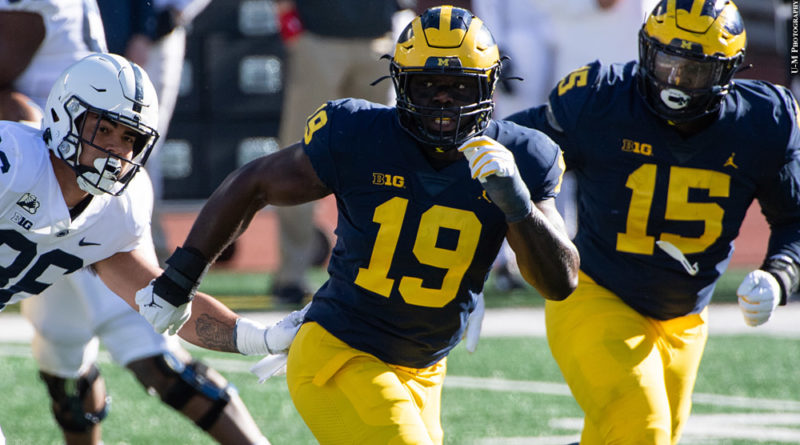 Imagine for a moment that each one of us is merely a human and not a part of all the smaller classifications of a long list of subgroups that we are born into, raised with and drawn to as we grow up and grow old. John Lennon’s “Imagine” is helpful here. Most of us can only “imagine there’s no countries,” but for that one percent of all humanity, it is not their imagination.

Welcome to Indianapolis, Kwity Paye, the Colts first round draft pick in Thursday night’s NFL Draft. Yes, he is a talented defensive end and hopefully will re-energize a pass rush for the Colts in the spirit of Dwight Freeney  or Robert Mathis. But more importantly to me, his family came to America as refugees from Liberia. I love that the meaning of his name, “Kwity,” is “civilization.”

I haven’t ever rooted for a Colts rookie more than I plan to root for him.

So often in American rhetoric these days, we define people in ways that makes it difficult to see them simply as people first. This is especially true when that definition starts with seeing anyone as “the other.” Too many Americans see the displaced people of the world, and those who simply want to relocate here, collectively as the “other” people. It makes it easier to view all of them and all of their situations as the same. They are not.

Of the world’s 80 million displaced people, the United Nations High Commissioner for Refugees, or UNHCR, has designated 26.5 million as refugees. Around half of them are under the age of 18. Almost 70% come from just five countries, and among them, only Venezuela is in the Western Hemisphere.

When the Biden White House let us believe that it was going to continue the last refugee policy of the Trump Administration, and leave our national annual cap for refugees at 15,000 for his first year in office, many were enraged. Me included. That shamefully low number is indicative of a nation that simply does not care. That cap represents one half of one percent of the world’s officially designated refugees. It is dangerously close to declaring that the United States will not help at all.

The Refugee Act of 1980 established the modern resettlement system here. And here’s a news flash: it works quite well. The Federal Refugee Resettlement Program is designed to help participants achieve economic self-sufficiency as quickly as possible following their arrival in the United States. Partnering with the UNHCR, a list of federal agencies and state-based government and non-profit organizations create the network that collectively help meet the self-sufficiency goal.

First, as much as the southern border is the source of viral video documentation of “illegal” entries into the country, the vast majority of undocumented people in America arrived here legally and overstayed their visas. Second, none of those people are participants in the resettlement program. That’s right, none.

No matter what your politics are, keeping the cap on our humanitarian participation at a number that signifies non-participation has absolutely nothing to do with what steals the headlines at our southern border. Those dramatic videos of families crossing the Rio Grande, youngsters scaling the newly built border wall, or “caravans” flooding a port of entry at Tijuana are regularly confused as all part of the same thing. The situation at the southern border is important of course, but it is not the resettlement program. Frustration with the problem there is not some magical excuse to forgo our human obligations elsewhere.

Former President Trump politicized the southern border crisis like no other politician in my lifetime. Many Americans agreed with him. And as we are so apt to do around here, we conflate that challenge with what the entire world agrees is a problem worthy of all nations’ support. A quick look at the top hosting countries might surprise many here. Turkey, Columbia, Uganda, and yes, Germany again, are on that list.

That’s quite a range of unique cultures which all see this need more clearly than we seem to.

We should look forward to learning about Kwity Paye for all of the things that are truly special about him, his family and his experiences. Don’t forget his unique humanity while we cheer for him on the football field this fall.