Piety & Power: Mike Pence is who we always thought he was

Tom Lobianco’s long awaited biography of Vice President Mike Pence is out. I remember when I heard the news he was going to write it, and looking back I’m a little embarrassed how excited I was. Finally, someone is going to tell us all of the things that will make sense of this man, character contradictions and all! Maybe that was asking a bit too much.

This book is about the conflict between Pence’s ambition and faith. Piety & Power explains both as clearly as possible–given the fact that Pence would 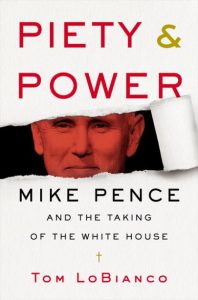 not give an interview for the book. But what ultimately is made most clear by the book is the unreconcilable conflict between those things.

There are numerous life stories that explain an upbringing that sounds familiar to many in Indiana. Cornfields and Catholic schools, with post-War prosperity and an Irish family heritage combine for a common Hoosier profile. His first recognizable talent that separated him from the rest of the kids in Columbus was public speaking. His obvious talent in the fifth grade at St. Columba School, led to contest victories and an active role on the speech team throughout high school.

While at Columbus North High School, he came across a book on the Constitution that he “read over and over.” Debbie Shoultz, Pence’s speech team coach and mentor describes this as when he “became interested in politics.” This descriptive is an important one.

Throughout the book, the stories of his political ambition pile up. He wants to be President of the United States. He wants to be elected as such, not given it through a string of unfortunate events that are being considered today.

What is consistently missing in the stack of stories is any storyline about his passion to actually govern. That has always been a Pence shortcoming, and Piety & Power illustrates it in overwhelming detail. His term as governor in Indiana does not feature any innovative management or policy accomplishment. Even when he had a policy victory, like his conservative version of Medicaid expansion, it was overshadowed by his propensity for governing mismanagement. Specifically in this example, I am referring to the “JustIN,” state run news service.

He was originally attracted to politics by the Constitution, became a veteran of the talk and news radio scene, but was now planning to have state government compete with the free press. This remarkable error in judgement was eventually dwarfed later on by his monumental transgression, the Religious Freedom Restoration Act, a debacle that occurred only a few weeks later.

Both spun out of control due to Pence’s failure to recognize the crises they were, and both were founded in a lack of governing instincts. Lobianco’s chronicling will be the source of history for generations to come.

How Pence was chosen by President Donald Trump to join him on the 2016 ticket serves as an excellent precursor of the chaos America is living today. The erratic and shallow decision-making process aside, the president actually did choose wisely on that one. Pence was the right guy to help Trump win. His ability to carry the message and stay on it in Trump world is a golden asset.

But after the dust of the 2016 election upset settled, Pence found himself in the position as the one in the room who should have been the most prepared to run a government. Even after nearly three years of dizzying turnover and disarray in the White House, he still might have that designation. The unavoidable truth remains that he is not a manager or a policy pro. He is a pure politician not driven by those pesky things. The disconnection between elections and government helps define him.

I do not question his faith in Jesus Christ, or his love for and devotion to his wife, Karen and the rest of his family. However, his betrayals of that faith are detailed many times throughout Piety & Power.

I did not like the title of the book when I first saw it. I do now. It perfectly captures the things that make Pence who he is: a man who wants his faith to justify his drive for power. But it doesn’t.

Lobianco shares a story from Robert Schenck, an evangelical pastor from one of Pence’s old prayer groups. He tells Pence “more than anything, we need you to find your conscience.” Pence’s response is not surprising, “It’s always easier said than done.”

Everyone in America should read this book. I knew it would be good, but now it should be required reading.