I live in a household that supported John Gregg for governor last fall. That is except for our soon to be famous dog, Birdie. As far as I know, Birdie and Governor Holcomb never met. But the Holcomb campaign went after the canine demographic with their “Hounds for Holcomb” outreach. I laughed at it at the time.

The most comforting news for those supporting John Gregg last year was that no matter the outcome of the election, Indiana was going to have a better governor. And we found out in a big way what that means this week.

In one press conference, our new governor pardoned Keith Cooper, declared a disaster emergency in East Chicago, and terminated contract discussions between the Indiana Finance Authority and Agile Networks. These were three items the governor inherited from his predecessor and former boss, and they were three things that would have been in my top five of things to fix as soon as possible. Congratulations to the governor for having the courage this took and congratulations to the people of Indiana on the first day of the rest of our lives.

As I wrote last year regarding the Keith Cooper saga, “The handling of the matter, or more accurately the timid recoiling of Pence from handling it, defines his leadership abilities.” It was important for Gov. Holcomb to deliver on his campaign promise to resolve the issue quickly. Not only did he act decisively, he acted correctly.

I must admit that this matter got into my soul. It actually made me feel ashamed of Indiana. Our sense of justice and respect for the rule of law was being threatened by this one. Vice President Pence will never shake the demon created by his overt avoidance in atoning for our state’s mistreatment of Mr. Cooper. For every Pence detractor who opens their rationale of opposition with RFRA, I volunteer to be the designated reminder of the injustice he perpetuated on Keith Cooper.

Gov. Holcomb did everything he should and could to make this right in his first month in office.

Then as if that wasn’t enough, he declared a disaster emergency in East Chicago. Again, as I angrily wrote last year, I threw both Pence and Holcomb under the bus when I described their approach to the lead contamination there as “shamefully apathetic.” From a purely political respect, one or both of them really should have promised Mayor Anthony Copeland and his constituents some help during the campaign.

I got to meet Mayor Copeland this week in the statehouse while he did some advocating for state resources in two legislative committees. The warm reception he got from legislators is cause for optimism. The following day, our new governor declared the emergency.

It is unclear to me if anything significant had changed that may have caused the declaration. From what I read, it appears to be a very basic desire of the governor to help. No pile of money has been sent. No over the top or insincere gesture was made. It is just a statement of priority. Again, congratulations to the governor, to Mayor Copeland, and to Hoosiers. Things are about to change for the better up there.

Finally, he cancelled negotiations between the Indiana Finance Authority and Agile Networks and the tentative deal that had been struck last year for leasing the state’s communications infrastructure. This is less sexy than the other two items. But one problem with the Agile deal was that the process used to reach the deal was mishandled and lacked transparency. The deal that resulted from the flawed process made for good headlines, but was bad for Indiana as soon as that cheap ink dried. Gov. Holcomb gets another star for recognizing it and sending it back to the drawing board.

Whew! That was one hell of a press conference! And no matter what your feelings are for his predecessor or his opponent last fall, this day was monumental. We have someone who wants to be governor occupying Room 206 of the statehouse again.

I have met Gov. Holcomb before but we aren’t friends yet. This is also the first positive column I have written about a sitting governor. Writing it was really easy. One thing that made it easy was my confidence that we have upgraded. 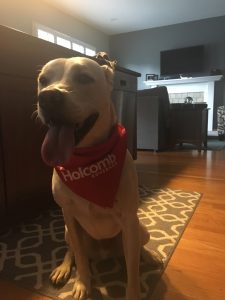 Birdie. I may very well be complaining about your next big day of announcements, but governor, you can count on our dog. Though he can’t vote, he can catch a tennis ball, bark at a stranger, or work a room for you anytime.