Alabama is a “Somewhere” that is being left behind 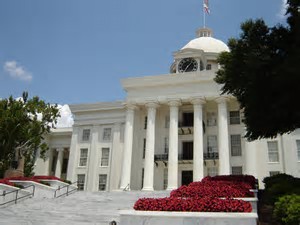 The University of Alabama’s Crimson Tide is headed toward another run for a national football title. And then there’s the bad news.

The State of Alabama is in the middle of doing terrible things. The leaders of the GOP down there are leading the charge. But this awfulness is not just about politics, though it is the platform our 22nd state is using to show the depth of its ills.

If you haven’t read the Washington Post story about some brave women who agreed to share their stories about Roy Moore, please do.  Moore is the GOP nominee in the Alabama special election to replace former U.S. Senator, and current Attorney General Jeff Sessions. In the era of accusations of “fake news” and politically motivated media, it does not surprise me that people unhappy with the story’s content are questioning its validity.

It’s also the era of Harvey Weinstein though.  America is collectively learning and adjusting to the #metoo movement that grew out of the tipping point that Weinstein provided. Many women and men have begun telling their stories of sexual harassment and abuse in an unprecedented truth to power trend that appears transformational for our culture.

And that’s the point of the WaPo story: truth to power.

Yes, Americans are innocent until proven guilty. That’s a criminal judicial standard though. It should not be confused as the defining line between right and wrong. The women interviewed were telling their stories, corroborated by more than 30 other people, about a man who mistreated them when they were young.

Many civic leaders in Alabama, in shameful displays of partisanship, have decided to defend Roy Moore. There is no factual basis for their defense. It is just their preference that the stories not be true. They have citied Biblical stories as historical references to explain why what has been alleged isn’t all that odd or even bad.  They have accused the women and other phantoms of conjuring the whole thing. One particularly offensive statement came from State Representative Ed Henry. He claims that if these women were truly victimized, they should have come forward years ago and that failure to do is criminally irresponsible. He said “someone should prosecute and go after them.”

I am so incredibly thankful that I am not from, or living in Alabama right now. I am thankful I don’t have to promote the state for economic development or tourism reasons. But I am sad that this is happening anywhere in America.

“Somewheres” are people who have an identifiable association with place. An Indiana corn or bean farmer, a South Carolina shrimper, a Chicago shoreline or Region steelworker are examples that come to mind. “Anywheres” are just what you would think they are. They are portable. They have skills, education or experience that make them valuable in a variety of places. The global economy is their playground.

Today’s young people strive to be Anywheres more than my generation did, and exponentially more than that of my parents. Millennials are choosing where they want to live first, and looking for jobs and careers second.

This week, Alabama’s Somewheres are announcing who they are in epic fashion. For the next thirty days leading up to the December 12 special election, the partisan fight for a U.S. Senate seat will look a whole lot like a culture battle between the America of the 1940s and today. Early handicapping indicates that the 1940s is in the lead down there.

Tones of “Make America Great Again” are ringing through the Yellowhammer State, without any apparent awareness of how that sounds everywhere else. It sounds more like “Make America what it used to be” in a shouting match with those who are more interested in “Making America as good as it can possibly be.”

Alabama and my home state of Indiana have much in common. Our state political breakdown is nearly identical. Our House of Representatives is 70/30 Republican and theirs is 72/33. The Indiana Senate is 41-9 R, and theirs is 25-8. We are the 19th state to their 22nd. Trump won big in both places. I contend they are deeper “red” than we are, but that is statistically debatable.

When Indiana found itself in the Religious Freedom Restoration Act crisis of 2015, our leaders recognized the damage it was doing to us and responded. It turns out, Indiana leaders do want to be attractive to Anywheres. We want people to visit, live and work here who can do all of those things anywhere they want. I’m not completely sure our leaders would have chosen the way they did if they had not been forced to choose.

Alabama gets to make a similar choice over the next few weeks. My advice to them is to choose wisely. Everyone from everywhere else will be judging their choice. The Somewheres of Alabama are already there. Unlike college football players, the Anywheres are harder to recruit.