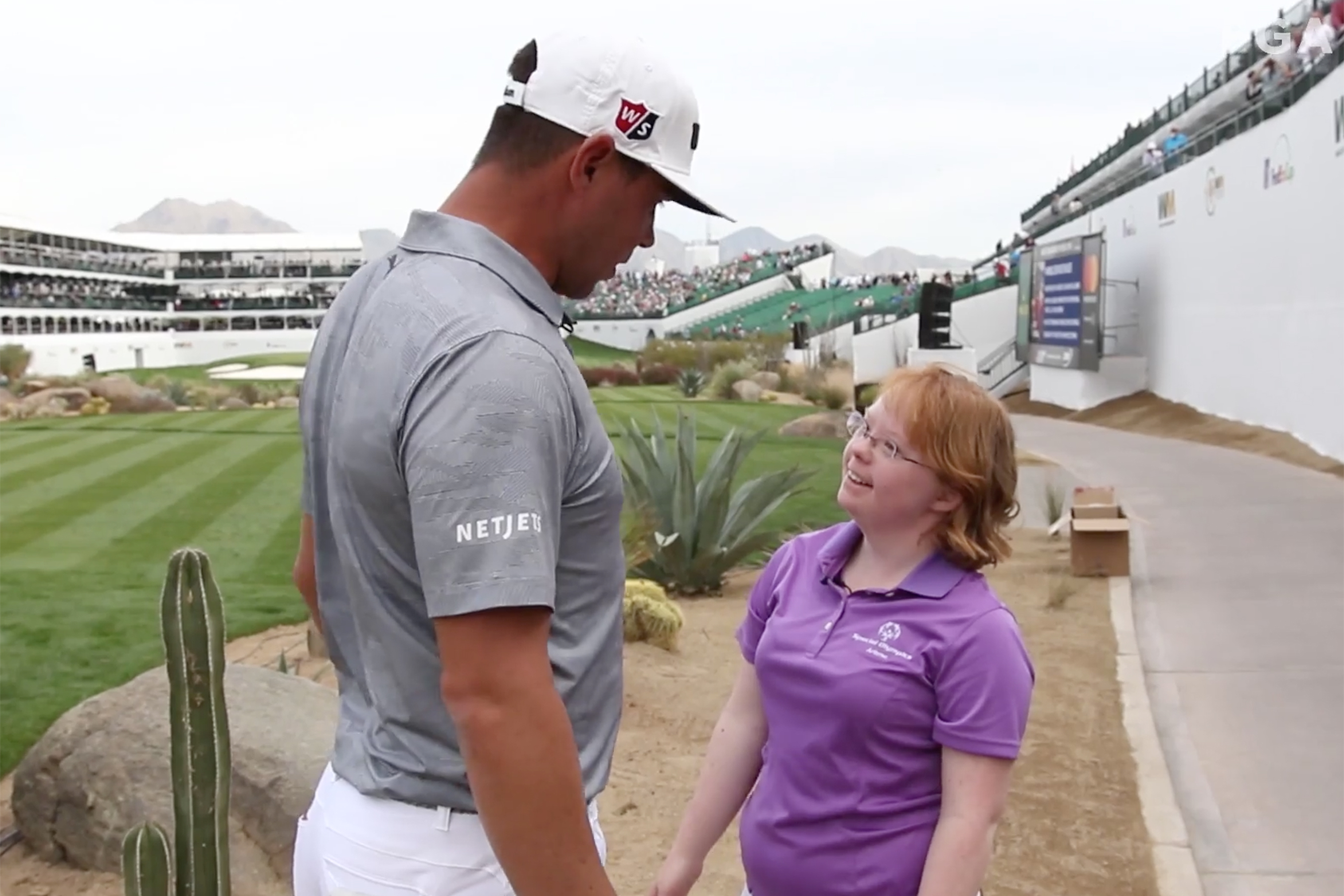 I don’t even remember how it caught my eye. It has made me smile a dozen times since though, and I hope those who haven’t seen it yet will take two minutes and watch.

Amy Bockerstette has Down syndrome. That is actually secondary, yet essential to the story. Primarily, this young woman is a golfer.

The Waste Management Open is the PGA Tour’s event this week. While it is not my favorite tournament to watch, the set up for the tournament does a strange thing to the course’s 16th hole. It creates a stadium around the par 3 with seating for 16,000 people.

For those who don’t play golf, being surrounded by the most well behaved 16,000 people is an intimidating environment. Especially for an amateur. I compare it to a world champion shower singer, like me, being thrust upon the stage at Radio City Music Hall to perform a duet with Lady Gaga. In my heart, I know I am capable of hitting the notes, but the likelihood of it happening right then and there are so slim, I would probably spend my energy preparing for the inevitable and profound humiliation ahead.

But Amy Bockerstette didn’t do that. She got a chance to play the famous 16th stadium hole in a practice round this week with the 2018 tournament champion, Gary Woodland. Woodland’s partner was Matt Kuchar, another of the world’s best players of the last two decades. There were only a couple of thousand people there, as opposed to the packed, drunken and unruly mob that will be there on Saturday and Sunday. Trust me, golfers know what kind of pressure most of us would have been feeling.

When I saw the video of what she did, I was unaware of her golf resume.  She qualified for the Arizona state high school tournament as a junior, and signed a college letter of intent to play for Paradise Valley Community College last year. Those are both firsts for any person, yes any person, with Down syndrome.

She was already special. But for those of us who were treated to the video-gone-viral of her playing on Tuesday didn’t know any of that at the time. Of course, learning about her greatness has made me smile a few dozen times more.

She went into the bunker and wedged it out to about 8 feet away from the hole to a roar from the crowd and true elation and celebratory laughter from her pro playing partner. “Let’s go make a putt, we’re going to make this,” Woodland said to her. Admitting later that “I’ve never rooted so hard for somebody on a golf course.” I believe that.

No problem. She nails that par putt right in the middle of the cup. You could see she knew she made it before it fell. The crowd erupts again. She made the classic move of reaching up to tip her hat to the crowd on the way to pick the ball out of the hole, only she wasn’t wearing one. She had imagined that moment before, probably thousands of times. The fake hat tip shows how legit she is–amateur golfers make that move every day.

“They love me!” she said several times during her brief moment in the spotlight. If she only knew. The small crowd in the stadium was about to be dwarfed by the love of millions to view her video. The bigger crowd loves her even more. I am confident she will be in the spotlight again, right where she belongs.

Google her.  No, you don’t have to thank me later, though I know you will be thankful.

Woodland called her “my hero.” Mine too.

There are more important things than golf. Most things, really. But this isn’t about that. Amy Bockerstette can do something few others can. She can inspire.

No young people controversies at the Lincoln Memorial this week. Only a couple of kisses blown to a crowed not expecting them, and a young woman golfer who has definitely “got this.”