A crazy-dull DC needed some palace intrigue.  Remember how boring presidencies used to be?  Who needs that?

Anonymity is powerful.  It’s power has been known for a long, long time. It allows for and encourages honesty.  That honesty may not be credible in court, or even in journalism, but it often is in daily life.

I’m a fan of anonymity.  I certainly don’t fear it.  But it’s a scary thing in today’s White House.

On Wednesday, the New York Times published an explosive op-ed written by a senior White House official, known as “Anonymous.”  It details a president described as unfit for the office.  There are damning details in the piece, though they are now familiar sounding.  The details are actually growing repetitive.

Excerpts from Bob Woodward’s new book, Fear, were reported earlier in the week.  Yet he is already playing second fiddle to the now famous Anonymous. The new book isn’t even due out until next week.

No disrespect to Woodward, but Anonymous is a really big deal.  Anonymous overpowered him with Wednesday’s column, which led to a frantic search for the new writer’s true identity.  More than 25 senior White House officials have issued public denials.

They seem to be more concerned with getting blamed for tattling on the boss than convincing America that the tattling was wrong.  Awkward.

Handicapping who it might be remains unchanged though.  As you may have guessed, these denials have no impact on my predictions, so here I go.

Who among us thought “Anonymous” was Rick Perry?  He is the Secretary of Energy.  Remember?  He is sort of an insider.  Or maybe it was Ben Carson?  There was nothing in the op/ed about overpriced furniture, so I didn’t immediately suspect the former presidential candidate and current Secretary of Housing and Urban Development.

Relax America.  Both of these guys have denied they wrote it, even though it would have been more difficult to convince me that they had.

How about Vice President Mike Pence?  Not only did he deny writing it, he called whoever did “gutless.”  That seemed out of character for the notoriously polite VP, and more like something Clint Eastwood might say in one of his westerns, right after he says “reach for it!”  Then I remembered President Trump called the author “gutless” the night before, establishing it as the official White House label for Anonymous.

So, I gave some more thought about the Pence reaction, because that’s what I do.  He also said the “New York Times should be ashamed” for publishing it and that it was a new low in journalism.  Oh yea?  Is it lower than his state run newspaper idea?  “Just In” came out of his Governor’s office, though I’m sure Pence would have never allowed it to publish such a cowardly screed.

What if “Anonymous” is a liar?  Admittedly, I had not considered someone unwilling to sign his or her name to an opinion piece might stoop so low as to also lie when doing it.  Being anonymous usually improves one’s openness and honesty, like when one is sitting in a Catholic confessional.

In any case, Sen. Rand Paul has a solution:  lie detectors.

I have the utmost respect for the medical profession and Paul is an ophthalmologist.  Dr. Paul thinks lie detectors would help with this. He said Thursday:  “I think it would be acceptable to use a lie detector test and ask people whether they are talking to the media against the policy of the White House.”

Don’t forget that Ben Carson is a brain surgeon.  Maybe the head doctor and the eye doctor can collaborate and administer the newly invented “Failed Presidential Candidate’s Honesty Test.” Patent pending, of course.

Lie detectors are fascinating.  The inventor of an early prototype of the now common lie detector was none other than William Moulton Marston.  He was not a physician, but he was a psychologist.  More importantly though, under the pen name of Charles Moulton, he was the creator of the comic book character Wonder Woman. 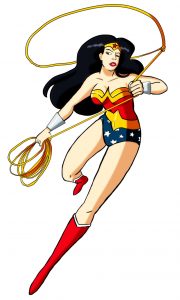 I’m not making that up.  Wonder Woman is an awesome character, and arguably her greatest power was that of her golden lasso that she uses to bind villains and force them to tell the truth.

Wow.  Wonder Woman would sure be a sight for sore eyes in Washington right now.

Or would she be?  The most famous and voluminous liar in history is President Trump.  That golden lasso might strike more fear into him than an army of Robert Muellers.

And Wonder Woman reminds me of who I believe Anonymous to actually be.