Bad news for my son: graduating from college was the easy part 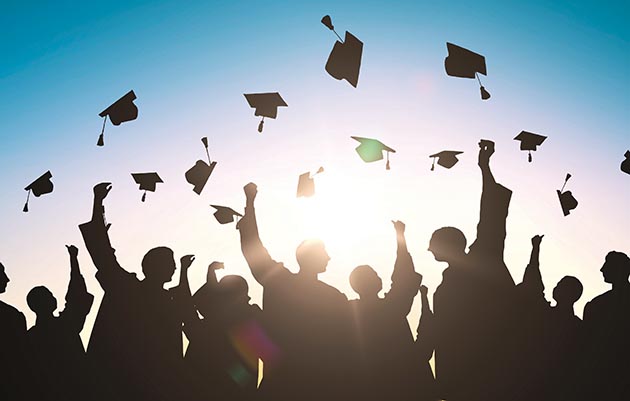 My younger son graduates from college this Sunday. Plenty of people do every May.

Yes, I’m a little proud. Yawn. Any parent would be.

On the other hand, I am crazy, over-the-top, obnoxious proud of a thousand seemingly little things that I know he will do, but hasn’t just yet.

He will have a Bachelor of Arts in economics. I have seen evidence that he actually has learned at least a little about the subject over the last four years. But let’s be serious for a moment, how can a 22-year-old know that much about that kind of stuff?

It takes suffering, decades of suffering, to understand the economic reality of life. Did his fancy school teach him about the perils of a payday loan? Do any of those bow-tie-wearing professors even know what it’s like to not have rent money this month? Or last month? My son still gets to learn about the value of money in every day life. Not just in his life, but in the lives of others.

He still has plenty to learn about economics. But he will.

He learned some practical things at that liberal arts fantasy land too, like a foreign language. What makes a language “foreign?” Hopefully, he learned that with regard to language, “foreign” is a bad descriptive. I hope he learned to respect language and its power. The more people one can communicate with and learn from, the better.

I am proud that he has a minor in Spanish. I want him to use it.

Many parents in my situation wring their hands about their graduate landing that first real job. Not us. My son already has his first real job. What? That is not how I did it at 22. Of course, he might hate that job. And the next one.

He is about to learn a lot about careers. I want him to know that learning won’t end soon.

School debt, that’s it! He must be buried in it. Yes, he has some debt and that was by design. We wanted him to have some skin in the game. It is a manageable amount, and he worries about it. I’m glad he worries a little, though I think he worries too much. He’s learned plenty about other people’s debt while studying economics.

Now he gets to learn what debt really means to real people. I want him to learn that well.

Yes, I am proud of my son. “Proud” means feeling satisfaction over something regarded as highly honorable or creditable to oneself. That’s right, congratulations to us! His education has been a family project for sure. It took a lot of work, commitment and money. His family is definitely satisfied and we were all involved in his academic success.

However, he’s the one who needs to be proud, though not for the paper he is getting on Sunday. He should be proud because he is a good person. He’s thoughtful and kind. He’s funny and smart. Graduating from college didn’t make him these things, he just is.

Continuing to be that is what I want most for him.

Doing well might turn out to be the easy part for my son and professional success is important. But the pressure he is going to get from me will be for him to do good. I want him to do good things for people and for the planet. I want him to be a good neighbor to those living in the place next door, and to the citizens of the country next door too. I want him to not have enough time in the day because of all of the good he wants to do.

And I don’t want all of the usual trappings and desires for “success” to get in the way of being the good person that he is. Education and professional successes create opportunity. Too often we waste those opportunities on more successes without giving enough consideration to use them for things that are truly valuable.

Americans measure financial success precisely. But there is no metric for goodness. It’s a little like art, we just know it when we see it.

We see the goodness in our son. And that goodness is everything.