Chancy the Ass takes Trump for a ride 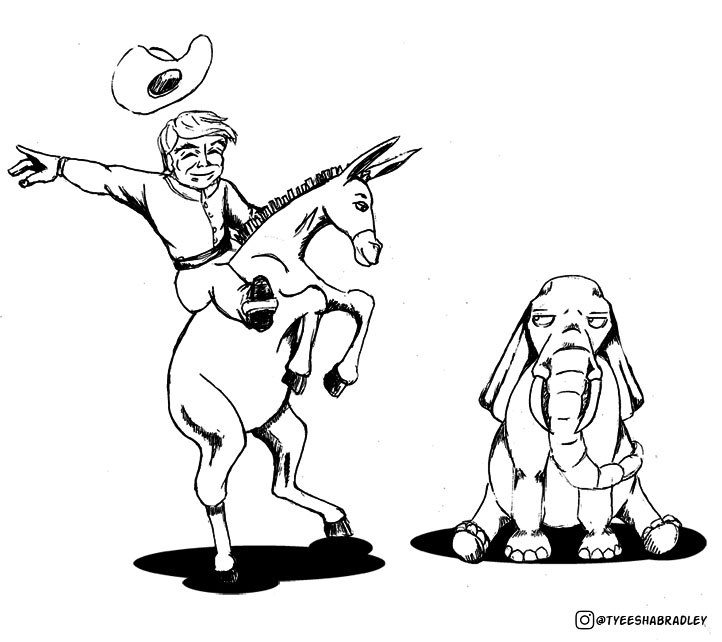 There’s a new character on the scene inside the Beltway.  It’s name is “Chancy” and it is a Democrat donkey mutation of “Chuck and Nancy” that I invented for President Trump this week. Yes, it’s a merger of Senate Minority Leader Chuck Schumer (D-New York) and House Minority Leader Nancy Pelosi (D-California).

Trump rode it to a surprise deal, infuriating those within “his own party” in the process on Wednesday, further clouding any hope of saving the 115th Congress for the Republicans who control it.

In a surprise move that America has not quite adjusted to yet, the president jumped off the GOP elephant and jumped on Chancy in the midst of an Oval Office meeting. The gathering featured congressional caucus leaders, Secretary of the Treasury Steve Mnuchin, and Vice President Mike Pence.

Trump cut off Mnuchin mid-sentence while listening to the majority’s position on the debt ceiling and Hurricane Harvey relief, pointed to Chancy and said, “I’m going with them.” This exchange was reported by Glenn Thrush of The New York Times. Vice President Pence apparently did not speak.

The president agreed to this debt ceiling deal that Speaker Paul Ryan had labeled “ridiculous and disgraceful” one hour earlier in public.  One hour earlier.

What this means in practical terms is that the 18-month debt ceiling extension that Republicans in congress wanted is now reduced to three months. This deal is also attached to more than $15 billion in Harvey relief.  Republicans wanted an 18 month extension so that another vote on the debt ceiling would not be needed until after the 2018 elections.  With the Trump/Chancy deal, it is back on the table in December of this year, and possibly a time or two more by November of next year.

Trump also tweeted out a message on his controversial stance on DACA at the urging of Pelosi this week when he tweeted:

Pelosi was concerned that his six month warning shot to congress on it was scaring “Dreamers” and she asked that he make a statement to calm them. Trump again obliged.

That’s quite a week!

So what should the American political structure make of all of this?

Trump’s moves this week confirmed some things that many suspected and predicted. First, the president is not a loyal Republican. Anyone who thought that has been living in a cave. Second, he does not think much of Senate Majority Leader Mitch McConnell (R-Kentucky). Senate Republicans will likely stand by McConnell, since, well, they are all actual Republicans and not free agents like the president. And finally, Trump will find a partner and cut a deal with anyone, as long as it benefits Trump.

Democrats had a good week, but that’s all it was.  What should be awkward for Trump voters and GOP loyalists (who are now clearly not the same people), is that this session of congress is lining up like this:

It is not only possible, but likely, that the only meaningful and lasting victory for conservatives during the first two years of a Trump presidency and total control of congress is the appointment of Supreme Court Justice Neil Gorsuch.  That is no small thing. But by comparison to what was promised to and expected by those celebrating in November, it is a dismal, losing season.

In Trump’s eyes, a player is either rising or falling in prominence and value. I don’t know how the GOP leadership in congress rises again, particularly on the Senate side.  After this week, any faith or trust that the majorities in congress may have had in the president is gone, likely for good. That’s hard to replace.

America’s first independent president will continue to be largely unsuccessful. Many Republican voters have reenergized their hatred of President Barack Obama this week, specifically in reference to his alleged overuse of executive orders during his presidency. Hold on to your commitment to the purity of “the process” is my best advice to this bunch.  You are about to see the separation of power get tested unlike it has ever been.

In sports, it is helpful to be able to identify a “trend” and to be able to differentiate a trend from a “streak.” Chancy is trending to the front of the pack in this Donkey versus Elephant race. But this race will be a long one, with plenty of lead changes.

Congressional Republicans have stayed loyal through a lot this year.  In a year full of “last straws,” this donkey ride might actually be the one.