Cheer up America, and don’t forget to “Love Your Enemies” 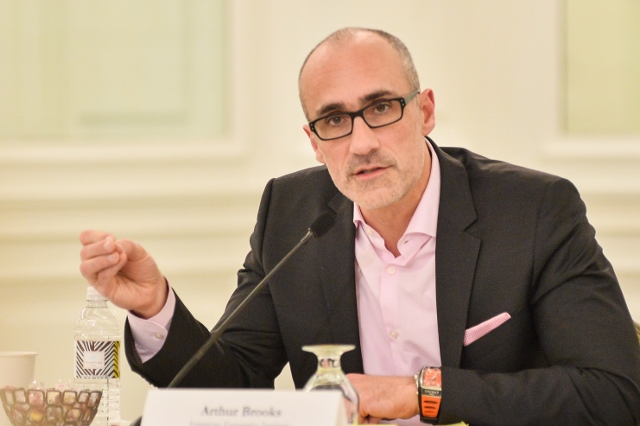 I often attend public speaking events. It is just one of the many perks of my day job. As snarky as that might sound, I actually do enjoy listening to experts and philosophers on just about any topic.

On Tuesday night, Arthur Brooks spoke at the 2019 Chamber Day Dinner at the Indiana Roof Ballroom. Ever heard of him? I had before I got my invite to the event, but I couldn’t remember why. But as an author, professor, economist, and a think tank CEO, I was pretty sure I would be interested in his comments.

It turns out that I remember him from his first commercial book, “Who Really Cares.” I didn’t read it. I did read about it though. It was published in 2006 and is about charitable giving, which demographic groups give and how much. Apparently, the reason I had heard about it was that it had enraged some who were unhappy with its findings and conclusions. His broad findings that religious conservatives are far more charitable than liberals, and that higher incomes push up charitable giving were particularly provocative. Some seemed to take those findings personally.

An interesting concept in that book is not just that higher incomes lead to increased giving, but also the reverse. Most importantly though is the idea that more giving leads to happier lives. What seems to be a driver behind much of what Brooks’ research does, is to answer the question of what makes people happy and how.

On Tuesday night, he announced the release of his latest book, “Love Your Enemies.” All 800 of us at the dinner had a copy of it waiting for us at our tables. My pile of books at home that I want to read, but haven’t yet, is a stack almost ten deep. So, I was kind of hoping to not be hooked into one that had not even made it home yet. I failed.

Brooks spoke for about a half hour, sharing insights into who he is and what’s in his new book. He agrees that the title of the book might lead one to believe that it is some hippie manifesto found only at the Woodstock Museum. It actually is a discussion of the depth of our nation’s “culture of contempt,” and strategies for us to escape from its cycle and live happier lives. If these strategies are followed by a critical mass, America can can be saved from that culture.

As I read it, I initially see strategies that he has collected that actually do work. Even a couple that I tend to use already. No wonder I’m so happy!

Primarily from his speech and the early part of the book, he identifies how contempt for one another is making cultural progress more difficult. Our goals should not be to disagree less, or tolerate more, but to continue to find usefulness in our foes.

In a discussion with the Dalai Lama, Brooks asked him: “Your Holiness, what do I do when I feel contempt?” The response was both simple and broad. “Practice warm-heartedness.”

That seems like easy advice to give, but a difficult life change for many people. Especially in the world of Facebook, and for those in that world who actually are “people.”

It’s a strategy I have used in my personal life and can attest that it works. Likewise, I have used it and have seen it used in politics with similar results. Of course, staying committed to the practice of warm-heartedness or gratitude is the key. Disagreeing with a kind word is often what leads to the best conversations. And the best conversations lead to progress and happiness.

Last week, my younger son and I went to a comedy show as we are prone to do. Demetri Martin was in the Egyptian Room at the Old National Center for the first time in a long time. My son asked me to describe Martin’s style and all I could think of was to say that he was smart.

He asked the crowd: “is ‘cheer up’ the worst advice ever given by anyone to anyone? When has that ever actually worked?” Great question, and I’m pretty sure the answer is “never.”

Practicing warm-heartedness actually does work though. I think Martin would agree with that the same way Brooks and I do.

I’m not done reading it yet or clear on the how-to strategies contained in the book, but I’m interested enough to give them some thought. Hopefully, I will get the chance to report back to you about them.

In the meantime America, try cheering up.