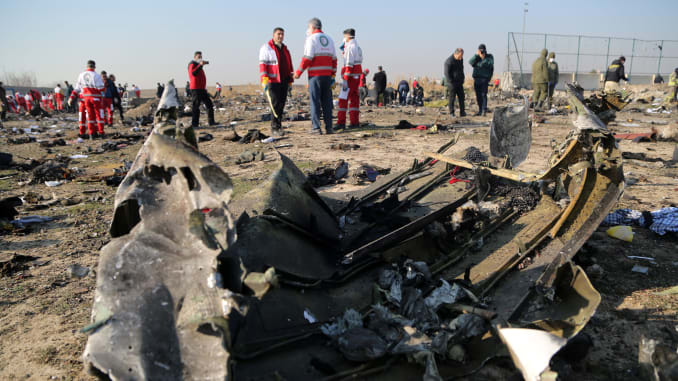 It was Tuesday night in America when the news flashed of the Ukraine International Airlines flight departing from Tehran and en route to Ukraine crashed, killing all 176 people on board.  The plane was a Boeing 737.

Only knowing those few things had my head spinning when I first heard. Two foreign nations which have dominated our news cycle are connected in a tragedy involving an aircraft built by a company fighting off a catastrophic year of crashes of its planes due to a design flaw. I immediately thought: “Boeing can’t survive more of this.” Then I thought, “Ukraine has an airline flying commercially in and out of Iran?” Followed by: “That has to be the most dangerous airspace in the world right now.”

Then I went to bed.

Not until Thursday did the news break that multiple intelligence sources concluded that two Iranian missiles were fired at the plane, and those explosions brought it down. Flight PS752 exploded just minutes after it took off Wednesday morning, at 6:12 am local time in Tehran.  The next part of the conclusion is the one that troubles me.

The firing of those missiles are being described as “accidental” and “unintentional.” Of course, Iran is not cooperating with Boeing by providing the plane’s cockpit voice recorder and flight data recorder, as is usual in commercial crashes. Ali Abedzadeh, the head of Iran’s Civil Aviation Authority, also stated: “We will not give the black box to the manufacturer or America.” Iran had initially blamed the crash on technical issues.

There is no surprise on their cooperation level after all. While we may not officially be at war with Iran, unofficially we absolutely are. Plus, no Americans were killed. Eighty-two Iranians, 63 Canadians, and 11 Ukrainians died.

I learned of the intelligence conclusions through a brief check-in on Twitter Thursday afternoon, where I saw a Canada Prime Minister Justin Trudeau news conference. I only heard part of it before rushing off to my next work commitment, but wondered why the news of the missile launch was coming from him. I found out later.

The last two weeks have been tense ones in the Middle East, and there is no end of that tension in sight. Just like the round of questions I asked myself on Tuesday night after the news of the plane crash broke, I ask similar ones regarding the origins and reasons for the current state of conflict between our nation and Iran. It is a long story. Even the chronology of events over the last several months is a long one to absorb. We tend to focus on the most recent exchanges with intensity, and avoid digging into the past that brought us to our most recent beginnings.

For this brief discussion, let’s start with the decision by President Trump to leave the Joint Comprehensive Plan of Action (JCPOA), otherwise known as the Iran nuclear deal. I have written about that deal before, specifically writing that it was a great deal, when compared to nothing. It still is, or was. It will be difficult to defend Trump’s move if what replaces it is war. America is not tolerant of another war, and I think the reaction to what has transpired in recent days is making that crystal clear.

A bigger question though is what is the strategy or foreign affairs policy of the Trump team that is driving decision making right now? I have read countless stories this week where journalists twist themselves into knots describing the conflict between Trump’s isolationist and conflicting interventionist tendencies. I engaged in one such conversation, labeling his strategy as nothing but impulsive.

Then I came across the best description I have seen. Jay Rosen, a journalism professor at New York University, and notorious media critic, wrote that Trump’s strategy is entirely made up of “cravings and resentments.” Yes, I find that to be the most accurate description yet.

Yes, these kinds of “accidents” start wars. I would say the war we are already in caused this “accident.”  But a man driven by cravings and resentments is not in the best place to resolve this complicated mess. Especially when those traits are specifically the keys to what started the current mess in the first place.