Democrats in the Heartland: Let’s take a walk out to the woodshed 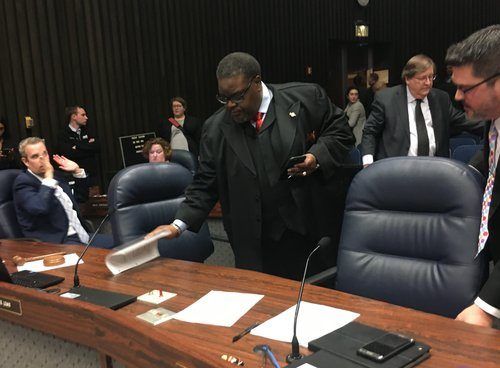 It was Sunday, June 21, 2015. A friend called me the night before and invited me to go to church at the Messiah Missionary Baptist Church the next day. That invite was easy to accept. I had been to Baptist services many times before. Honestly, I always feel better after having been.

This space is often filled with the latest complaint about the GOP. Not this week. It’s the other side’s turn.

No, this week the Democrats are the ones making mistakes. Or maybe they just aren’t very good at politics. Or both.

Stephen Clay is the new president of the Indianapolis City-County Council.

He is also the Senior Pastor at Messiah Missionary Baptist Church. I want to make sure people know that he is excellent at delivering a sermon. I won’t ever forget the one I heard. It was the Sunday after the Charleston, South Carolina church shooting. He didn’t write that sermon to make me feel better, but it did just the same.

It has now been five days since Clay orchestrated his “coup” to unseat the former president of the council, Maggie Lewis, and the public still has no idea why he did it. That’s a problem. This move does not appear to have any reasoning. If there is a reason, it must be a pathetic one. The outcome certainly is.

At a time when Democrats control so little in Indiana, the City of Indianapolis is the shiny exception. They have the mayor’s office and every other city and county wide office, and until Monday, they also controlled the council. Clay teamed up with Republicans to win and, as part of the deal, turned “control” into a job share program with Marion County Republicans.

I was asked by a reporter, two days after it occurred what the reason was. I told the reporter that I had not heard a coherent reason. She replied that she had not even heard an incoherent one. Media coverage of it is consistent with that.

Indianapolis Recorder president, Shannon Williams, wrote in an editorial on January 11 about Clay that “his tactics have been sexist, immoral and just outright distasteful.”  The scathing piece also did not point to a governing reason for the coup. Not because it was an incomplete column, but because there actually isn’t one.

Good luck Indianapolis Democrats. Because luck is your only hope for this ending well.

On the same day Williams’ column ran, Politico Magazine ran an in depth piece titled “Heartland Democrats to Washington: You’re Killing Us.” It largely features Indiana State Representative Terry Goodin, the new minority leader of the Indiana House. Goodin’s conservative. He’s a “Bible poundin’, aisle runnin’ Pentecostal.” He’s anti-abortion and pro-gun. Some national Democrats point to his politics as the type they need to attract to return to power.

Goodin’s example is more from the “all politics is local” playbook of former Speaker Tip O’Neil.

Democrats are looking to improve in the Heartland, where Trump swept in 2016. It is a charge being led by Congresswoman Cheri Bustos from Illinois. The movement rages against the identity politics that arguably plague the modern party. Yes, it is arguable. 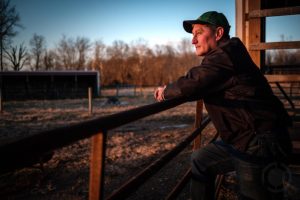 The Politico article details an example of offensive racism displayed by one of Goodin’s constituents, a man named Delmis Burns. Burns tells a story about the time he was asked at work to train a new driver who was Muslim. He refused. “They’re taught to be nice to you,” he told Goodin, “and then they blow you up.”

Goodin did not push Burns back. Later in the story, Goodin goes on to explain how Burns is the kind of voter that Democrats are leaving out, that the Ds claim to advocate tolerance while being intolerant of folks like Burns.

And there’s the rub. National Democrats are not advocating discrimination against Delmis Burns and those who think like him. They should, however, be willing to explain how the Burns story is discriminatory toward Muslim Americans, and therefore intolerable.

Democrats don’t need leaders who are unwilling to do that. That’s GOP stuff. The party doesn’t need a leader who won’t advocate for reasonable gun laws. It doesn’t need someone who won’t govern by fighting for a woman’s right to choose.  It doesn’t need office holders who are not enraged by sentiments like President Trump’s “shithole countries” spasm this week.

Of all the differences that define our nation’s political debate, none are more clear to me than the debate between the past and the future. The campaign and the election of Donald Trump was an example of the past winning. Two thirds of Americans already regret it.

If candidates in the Heartland don’t want to push an agenda that is based on a better future, maybe it is best that they lose.

Whether it is Stephen Clay’s sexism or Delmis Burns’ racism, neither are attractive examples of a tomorrow worthy of rallying around.

I come from two small towns. Being taken out to the woodshed is largely symbolic in both places, but not entirely. Some urban Democrats walked themselves out to that woodshed this week. Rural Dems in the Heartland appear to be inviting the rest of the party to do the same.