In a dramatic turn, “we hold the government to its word”

“On the far end of the Trail of Tears was a promise,” the majority opinion opened in the case of McGirt v. Oklahoma. Sometimes promises are hard to keep, especially when they are nearly two centuries old and made by the government. When the government’s power is so mighty, so supreme, it habitually confuses that power with righteousness.

Jimcy McGirt, was convicted of three serious sex offenses in Oklahoma state court in 1996. In post conviction pleadings, McGirt, as a Native American, argued that because the crimes occurred on Native American land, and the Oklahoma Enabling Act did not “disestablish” those reservations, the state did not have jurisdiction in the matter. His lawyers argued that the federal government had jurisdiction, and that is where he should be tried or not.

It sounds like a scenario that might not come up often in 2020 America. But it actually is a near identical set of circumstances that exist in another case that was pending before the Supreme Court, Sharp v. Murphy. In that case, Patrick Murphy, also a Native American, committed murder on territorial lands. He confessed to the killing, was convicted in state court, and ultimately sentenced to death. In Murphy’s appeal in federal court, he made the same arguments as McGirt, and won at the Tenth Circuit Court of Appeals. The State of Oklahoma appealed the ruling to the U.S. Supreme Court and it was heard in 2018, but the court was unable to reach a decision, a situation I was unaware ever occurred until Thursday.

The court was deadlocked in a 4-4 tie because Justice Neil Gorsuch recused himself from the matter. He had done so because in the Murphy case, he was on Tenth Circuit Court of Appeals that issued the original decision. When the McGirt case presented itself to the court, it was able to consider the question with all nine justices available to decide it.

Gorsuch has a history of ruling in favor of tribal authority, and his appointment to the nation’s top court in 2017 was supported by the Native American community. He stayed true to form in siding with McGirt, holding the nation to its promise, and ultimately writing an opinion that truly brings me joy.

McGirt and Murphy are both bad people who did bad things. They deserve to be treated accordingly, and their victims deserve justice. But these cases were vehicles to affirm what several different tribes of Native Americans knew to be true: America made a deal with them a long time ago, and the only right thing to do was for it to fulfill its part of that deal.

The Major Crimes Act is the federal statute at issue. It provides that, within “Indian country…any Indian who commits” certain major offenses “against the person or property of another Indian or any other person…shall be subject to the same law and penalties…within the exclusive jurisdiction of the United States.” So, was it Indian country? The state argued it was not. The court ruled that it was.

The land was designated by the Removal Treaty of 1832, enacted at the end of the infamous Trail of Tears, another dark episode in American history. The “Indian country” that was established by the treaty included land reserved fo 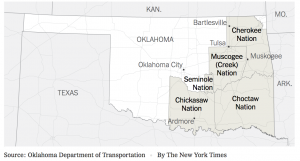 r the Muscogee, or “Creek” Nation. It was never modified or repealed, specifically when an Indian and Oklahoma territorial agreement led to Oklahoma becoming the 46th state in 1907. Thursday’s court decision declared the treaty is still in effect.

America has debts to pay right here at “home,” and the rulings in these criminal cases do not pay any of them. However, they do reaffirm the promise made all those years ago and that will matter in other ways going forward.

While reading the reactions to Thursday’s ruling, I came across comments made by Sister Helen Prejean. You may recognize her name from the book and movie, Dead Man Walking, or from her tireless work as an anti-death penalty advocate. She was fighting the Murphy sentence.

In a tweet, Sister Prejean wrote: “Oklahoma argued that many residents will be surprised to learn that they’ve been living on tribal lands. Justice Gorsuch replied that members of the Creek Nation who signed the original treaty in 1832 would also be surprised to find them there.”

This ruling could be hard on the state, as there may be numerous criminal convictions vacated. Sometimes doing the right thing is difficult. And even though it is clear what that hard, right thing is, I’m sure you will be OK.