Field of Dreams, Shoeless Joe and budget choices in Indiana 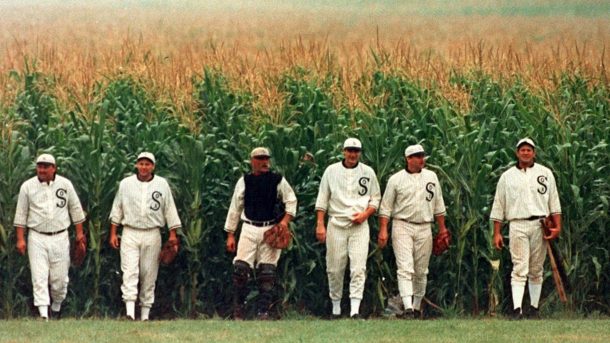 It has been thirty years since the release of the Kevin Costner movie, Field Of Dreams. Paul Newberry of the Associated Press wrote about the movie’s anniversary last weekend and it got a few of us in the Indiana Statehouse talking.

The metaphorical overload of the story is a fun topic, but I tend to agree with Newberry. It’s a bad movie.

For the true coastal elites who may read this, the movie is based in Iowa, not Indiana. And though our states may appear to be identical twins, please don’t insult either of us by saying that out loud.

How are we different? Last Fall, Iowa had a gubernatorial election. One of the campaign issues was the $127 million budget surplus the state had. Please forgive me, Iowans. It appears your surplus number is missing a zero on the end. How can a state get by on such a paltry reserve?

In Indiana, we like that number closer to $2 billion. And for the better part of the last decade, protecting The Great Hoosier Surplus has been more important than just about anything. We reaffirmed our faith in it this week with the passage of our latest biennial budget as the final gavel fell on the legislative session Wednesday night.

I can sum up the session’s plot in one word: choices.

The two-year revenue and spending plan was constitutionally required to be decided this year. As part of that duty, our legislature chose to grow its already oversized surplus. Everything else was theater. So, since we are talking about theater any way, let’s do it better than the legislature did.

Hoosiers and Rudy are sports films that are based in and about Indiana. Both are better movies than Field of Dreams. Even a good part of A League of Their Own was filmed at Bosse Field in Evansville, which is an unquestionably better baseball movie than F.O.D.

Yes, our sports movies are better than Iowa’s. But I prefer the way they budget.

Iowa’s tiny reserve would scare the hell out of us here. What will they do on a rainy day with that pocket change? As most governments do, they will likely cut spending, or raise revenue. How’s that for a news flash?

Our surplus has been more than a billion dollars since budget year 2011, just three years after the financial crisis of 2008. It has been in the $2 billion range since 2012.

This year, the legislature chose to grow the $1.85 billion surplus by an average of $73 million a year for each of the next two years. That will put us in our $2 billion comfort zone. So, how do we do it?

Choosing not to invest up to $300,000 in a tax credit for 529 savings plans for families with a member who has a developmental disability is one. We apparently can’t afford that. Also in the arena of development disabilities, the direct service providers for this vulnerable population have not had a raise in a decade. These Medicaid funded jobs pay fast food wages in many cases. But our legislature chose the surplus over a modest pay increase.

Those are bad choices. And there are dozens of other easily affordable examples that all together could have been chosen and still totaled less than that $73 million a year.

I have written about it many times and expect to do it again. Indiana has become beholden to its budget surplus. A slave to it really. There is no evidence, none, that our leaders have the courage to use that money when times get tough.  Or on a rainy day. Or in an economic downturn. Our leaders claim they will, but I can identify plenty of rainy days and downturns since the surplus passed $1 billion, and those crises have not even been legitimately considered as worthy of dipping into it at all.

When times get tough in the future, spending will be cut and new taxes will be considered before, yes before, the surplus is jeopardized. It is almost mythical in its power over the Statehouse.

Much like the mythical voice of Shoeless Joe Jackson in Field of Dreams. The fictional version of the disgraced Black Sox Scandal player said these famous words in the Iowa cornfields: “If you build it, he will come.”

Indiana built a surplus and all that came was a AAA bond rating. That’s not nothing, but it sure isn’t everything either.

And if you want to watch a truly classic baseball movie, choose wisely, and pick Bull Durham.