Hate crime law: Nothing to oppose, and no one to oppose it for 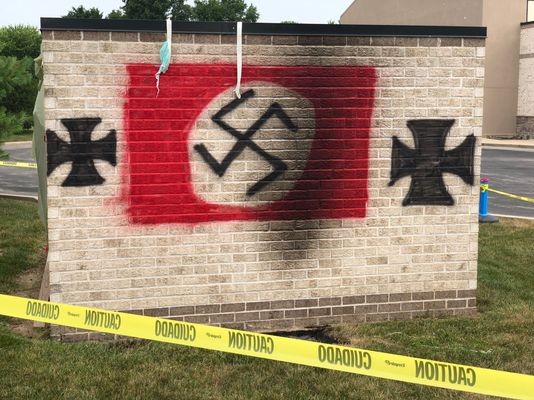 photo by Justin Mack for indystar.com

I worry about those opposing hate crimes legislation in Indiana. The talk this week has them confused.  Conservative pundits want it that way.

The issue is just not that difficult.

During the last three legislative sessions, Sen. Sue Glick (R-LaGrange) has proposed legislation that would establish sentencing aggravators for those convicted of a crime where “bias” exists as a motivating factor.  Her bills defined these acts as crimes committed with the “intent to harm or intimidate an individual because of the individual’s perceived or actual” traits.

Let’s break that down for the chronically confused.

First, Glick’s bills would only be in effect after an individual has been convicted of an act already defined as a crime in Indiana.  In the case of the Carmel synagogue atrocity, the crime would be vandalism, criminal trespassing or mischief, etc. If someone is convicted of it, under Glick’s bill, the prosecution can argue that the judge should grant a stiffer sentence if a preponderance of evidence shows that “bias” was an element of the crime.

So, what’s the big deal?

If opponents are being honest, they will say that they do not want the specific “traits” that are listed to be put into Indiana state law.  Those traits are: race, religion, color, sex, gender identity, disability, national origin, ancestry, sexual orientation,  and ethnicity.  It seems to them that “race” means non-white, “religion” means non-Christian, “sexual orientation” means gay, and so forth and so on.

Actually, the traits mean any type of trait within that word.  No one is special, and no one isn’t.

So, let’s break that down too.

To those on the far right, yes, even you have a gender identity.  These traits exist for all of us.  The legislative language doesn’t “favor” anyone.  It is irrelevant whether the victim’s most innermost concept of self is male, or female, a blend of both, or neither.  It is simply how individuals perceive themselves and what they call themselves.  Crimes committed against people because of these perceived or actual traits absolutely should be considered as an aggravating circumstance.

Some say judges can already aggravate sentences under their existing discretion and therefore we don’t need a new law to complicate things.  The Indiana Supreme Court ruled in Whitmer vs State in 2003 that racial motivation can be an aggravating circumstance.  Specifically, the court said that “the sentencing statute’s list of enumerated aggravating circumstances is not exclusive.”

Sen. Glick’s legislation would not create exclusivity either.

Further, while the trial court exercised discretion in Whitmer and it was upheld by the Supreme Court, rarely do courts do so.  Direct guidance from the legislature becomes quite helpful in this void.

The confusion, however, that comes from such a simple policy change ignores the biggest part of the problem: the victims.  I use the plural tense of that word purposely.

A bias crime is meant to intimidate people who otherwise are not even legally thought of as victims in current law.  The Carmel incident will only consider the victim to be the property owner.  Right now, it is nothing more than a crime against property.  Is that all that swastika and those iron crosses were?  Do Hoosiers really think this was simply a crime against the specific owner of that shed surrounding that garbage bin?

Confused opponents of any of Sen. Glick’s bills like to say that “hate is part of every crime.”  No, it’s not.

If someone spray painted “Rob Kendall sucks on a wall, isn’t that a hate crime against Rob Kendall?”  The answer to that ridiculous question is no. If there were a community of Rob Kendalls running around who might be intimidated by it, my answer would change, but we would have an obvious other problem.

Opposing this legislation only benefits convicted criminals.  It doesn’t impede the rights of any law abiding citizen or group of citizens.  It literally only matters after a conviction has occurred for breaking a law that already exists.

Alabama and Mississippi have hate crime laws.  And even Indiana had one until 1977.

That’s right–Indiana had a hate crime law in effect for more than 30 years between 1946 and 1977.  It was repealed during the rewrite of our criminal code in 1977, though no one can recall why. The reason it passed right after World War II is clear though:  to specifically deal with the kind of crap that happened last weekend in Carmel.

And finally to those who Glick’s bills really hurt, you were on your way to jail any way. Pack an extra toothbrush.