How the Statue of Liberty will crush Stephen Miller 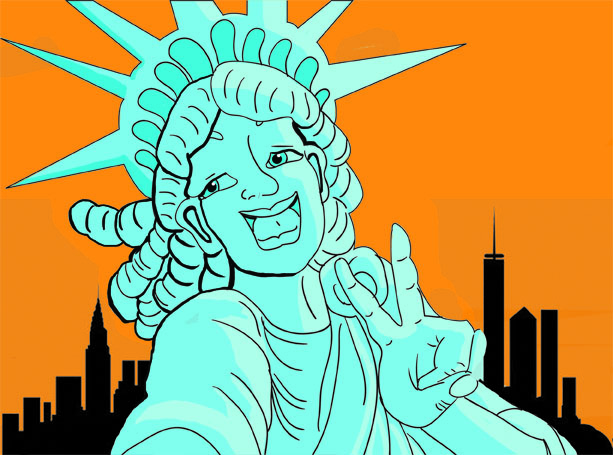 I have always wanted to visit the Statue of Liberty and Ellis Island.  A family visit in the area finally served up the opportunity this week, and so seven of us made the trek over the New Jersey Turnpike and through the Brooklyn Tunnel to spend the day at the world’s most known symbol of freedom.

Every American needs to make this trip. While many of us know tidbits about Liberty Island, and maybe even less about the neighboring Ellis Island, we should thank CNN’s Jim Acosta and White House Senior Policy Adviser Stephen Miller for their viral exchange this week about some of it.

This exchange was provoked by a discussion at a White House press briefing on legislation filed by Senators Tom Cotton (R-AR) and David Perdue (R-GA) and is being pushed by President Trump. The bill rewrites the priority and quota system for legal immigration. The system in place today has been in place since the mid-1960’s. It establishes the family connection priority, the quota of about 1 million immigrants per year, and the detailed policy on “priority workers.”

The Cotton-Perdue bill has two main goals: to reduce the total number of immigrants allowed each year; and, to give priority to those with a higher level of “skills.”  Those “skills” include, among other things, the ability to speak English.

I must admit that the more I learn about the bill with a painful commitment to objectivity, the more I realize that it’s impact would not be a sweeping policy change. Of course when applying context to the discussion from the nationalist movement, and listening closely to its proponents, I quickly return to reality. The purpose of the bill actually is hateful. It is pandering to an uninformed base of voters. And applying the American experience to our history in this arena, I am certain that the basis of it is just not reflective of our culture.

My visit to the Statue of Liberty and Ellis Island this week made that clear to me.

She came from my great grandpa’s home in Ireland, right around the time he came to America.

First of all, Miller and Acosta mixed it up over the weight that should be given to the message from “The New Colossus,” the famous sonnet published by Emma Lazarus in 1883 that is etched into the base of the Statue. It was published specifically to raise money for the pedestal, though it wasn’t placed there until 1903. Mr. Miller thinks that delay matters. It doesn’t.

Lazarus’ famous words actually do represent a common sentiment of the American view of this nation of immigrants:

“Give me your tired, your poor,
Your huddled masses yearning to breathe free…”

It is an inspirational welcoming that is well known throughout the planet and like it or not, it is something of which we are proud. The statue itself was a gift from France, but those words came from us.

The statue of Annie Moore. I wonder if she knew James Patrick (Padraig) Courtney (O’Courtney). My great grandpa.

President Grover Cleveland dedicated the statue in 1886 in a fantastic speech. But the day also featured protests from women and suffragettes since they were not allowed to attend the ceremony on the island itself. In response, they circled the island in boats protesting their discriminatory mistreatment.

Again, that is who we are, or were.

Stephen Miller is a dangerous person. Vanity Fair’s profile of him in May is something too few of us have read. He is an unqualified architect of a sentiment inside the Trump campaign of last year and now the White House that is shameful. Implementing his version of “nationalism” has been his young life’s work. This 31-year-old man has a mean streak in him that should have kept him out of politics, not fueled his rise to power.

Faith in the ongoing strength of those who fought to get to Ellis Island will need to be strong in the face of this unfortunate chapter in our history. My day at the historic site rejuvenated mine.

A flaw in the sentiment coming from Cotton, Perdue, Miller and Trump starts with their discussion of “skills.” Their idea is that we want people with desirable skills. The error it makes is that it confuses the skills of people, with the value of people.

The value of immigrants has always been their loyalty to the idea of America. They have wanted to be here because of our commitment to self governance, to equal opportunity and to freedom.  They don’t seek the free ride today’s nationalists believe they all conspire to steal.

On one of the displays at Ellis Island was this from an Italian immigrant:

I bet the person who told that story never paved a street before he got here. His value was his desire to.

Mr. Miller, the list of things that the Statue of Liberty represents mean more to us and to more of us than you think. This bill of yours is going nowhere, and in the end “Liberty” is what ultimately will crush it.