Invictus: A special group will be needed to clean this turmoil up 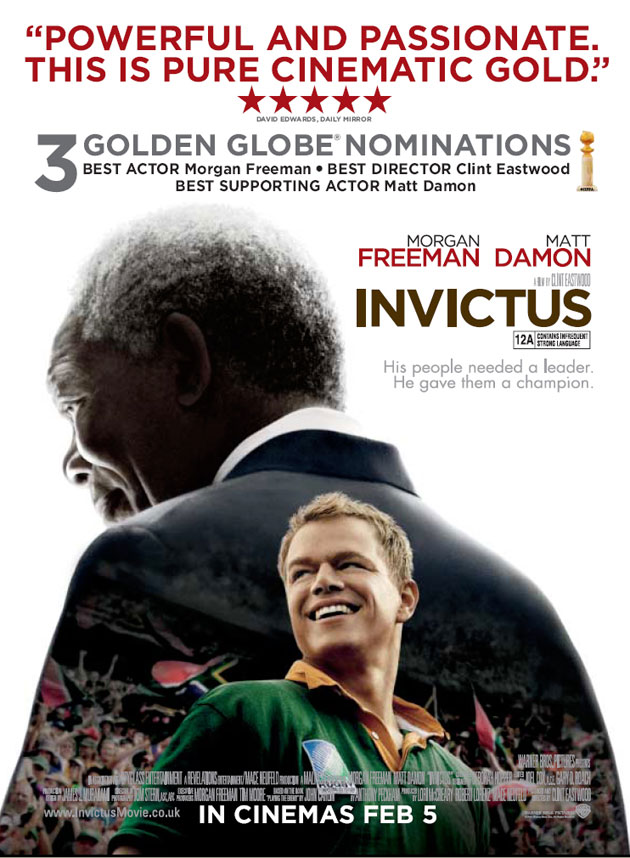 photo from The Independent

I just finished a class in my graduate program titled “Leading Collaborations.” The last Zoom discussion of the class covered the leadership mindset of Nelson Mandela, as portrayed in the movie, Invictus. The 2009 film tells the story of Mandela’s transition to power as the President of South Africa following the end of apartheid. Specifically, it details his drive to see the national rugby team win the Rugby World Cup, an event South Africa was hosting the year after his historic 1994 election.

The crisis we are in today could use special leadership, a collaboration of people of good will all driven by the challenge at hand. Take a break from whatever series you are binge-watching, sports classics replays, or Heaven forbid, cable news, and watch this movie. I was shocked to find out I was the only one in my class who had already seen it.

It is important to watch it through the lens of today’s context though. America’s situation could be so different than it is.

Apartheid is a word that always had an exact meaning to me. It was the word we used to describe the segregation and discrimination in South Africa. In English dictionaries, these words are used in the definition, but they also specifically refer to the country. The word in Afrikaans translates into “separateness” or the “state of being apart.” Literally: apart-hood.

That’s what we are right now: apart from one another. Some of our separateness is for good, public health reasons. On the other hand, much more of it is not.

Repairing that turmoil was what Mandela saw as the challenge of his time. It wasn’t a mess he created. It had been the official policy of South Africa since 1948, and the unofficial one for much, much longer. Many of those who voted for him did not see the uniting of the nation as the clear priority of the first black president. They saw Mandela’s election as an opportunity to settle grievances over the horrible way the black majority had been treated by the white minority for generations.

Imagine how things could be different here, if ending our separateness was our elected leader’s goal. Like it or not, it will need to be the highest and most constant priority of our next one.

In 2020 America, our leader has engaged in a spate of outbursts that promote our own version of “apart-hood.” At a time when doctors, scientists and public health officials are trying to desperately teach us how to keep our bodies apart from one another to keep us safe, our president is doing all he can to destructively keep our souls apart as it is his only strategy to retain power. The approach led to his 2016 electoral college victory, with a minority of American votes.

It is unlikely to work twice.

The state by state polling numbers for the incumbent have been bad for a long time, even before his presumptive challenger, Joe Biden, had locked up the Democrat nomination in March. A poll released by Monmouth University on Wednesday shows Biden ahead of President Trump, 50–41. Possibly more troubling for the president is that Biden leads among women voters by 20 points. These polling numbers will be difficult to overcome, especially when they immediately precede the worst jobs report ever, including The Great Depression.

We will not “reopen the economy” and return to anything resembling the pre-COVID-19 world this year, or next. The longer we stay divided, the longer our recovery will take. It is that simple. The current president is incapable of leading us away from division. He isn’t even trying. I worry more about his followers though. While Trump’s time is likely coming to a close, transforming those who bought into his divisive approach to politics will take longer to heal.

The reason for the movie title, Invictus, comes from the 1888 poem of the same name by the English poet, William Ernest Henly. It is a Latin word that means “unconquerable.” It was the poem that gave Mandela strength and hope during his 27-year imprisonment from 1963 to 1990 for conspiring to overthrow the state.

The poem’s famous ending “I am the master of my fate: I am the captain of my soul” means it is me who decides my future.

The cleansing of the disarray of our collective soul will require greatness. Mandela’s biggest challenge was convincing the righteous majority to rise above its justified grievances. Thankfully we have his example to follow.