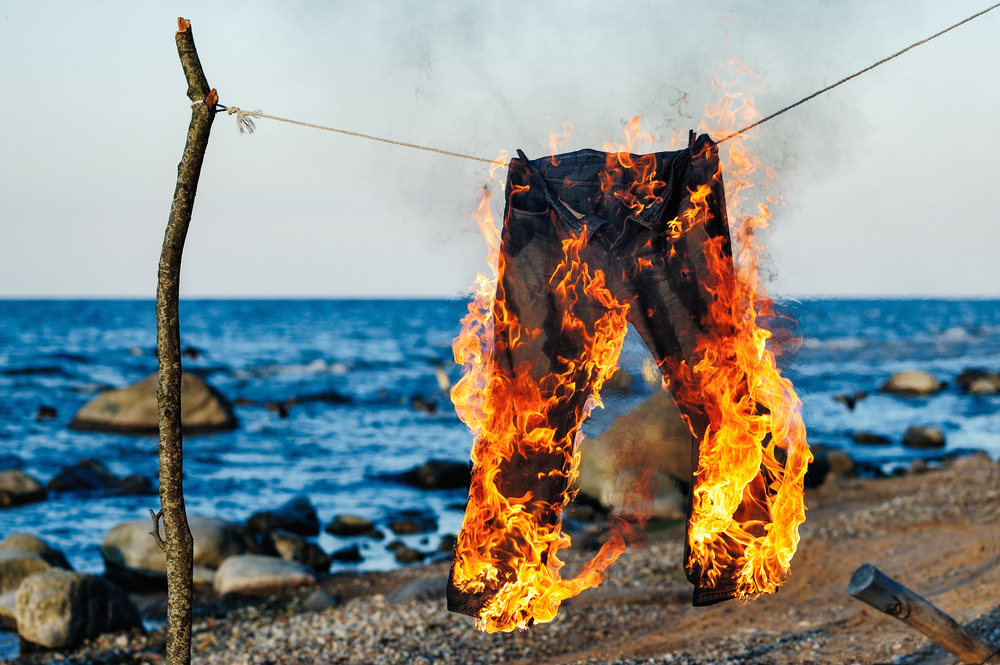 I reevaluated how I was spending my time after election season. Even though the big one went my way, I was exhausted with all of it. And with “the big one” not actually being called until November 7, it was clear to me I needed to change the channel, focus more on fantasy football, and generally get back to a healthier way of living. 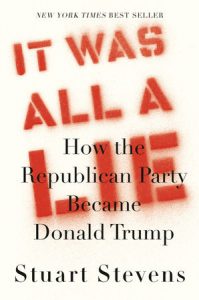 Since then, I have read five books. I didn’t think any of them had much in common, until I decided to write about the one I just finished, Stuart Stevens’, It Was All a Lie. The book is not merely the rant of a lifelong Republican angry about Trump’s destruction of the GOP, but a detailed account of how several decades of Republican self-delusion and whiteness led to Trump’s chaotic and humiliating presidency as a natural outcome. The bulk of Stevens’ theory is based on how the party’s post-war platform was founded on and continues to be rooted in racism.

That notion will agitate some, and to those people, my advice is to read the book. It is covered with a level of detail that will be difficult for any Republican to effectively dispute, by someone on the inside for the last forty years. The book was released before the election, so the lie or lies detailed in it need updated with the new ones that have been perpetrated on America since.

What the soon-to-be-former president, at least 147 members of congress, thousands of rioters at the U.S. Capitol last week, and millions of others cheering them on from afar need to learn about the argument that the election was “stolen” is this: it was all a lie. And a really big one. Believing in a fantasy that the outcome of the November presidential election was anything different than Joe Biden handily defeating Donald Trump is as dangerous as being an anti-masker. Rioting over that fantasy is like looking under your pillow for cash, finding none, and then attacking your parents over the Tooth Fairy’s obvious abduction.

No, the candy-coated video statements asking for peace, and the mealy-mouthed acknowledgement that Biden will be inaugurated on January 20 don’t cut it. What needs to be said is that the election was legitimate, and that Joe Biden won fair and square. And it needs to be said by the chief liar, President Trump, and his lying minions competing to inherit the support of his cult. Until they say it, this fallacy will fester, and more violence will follow.

Politicians lying? What’s new or special about that? It’s fascinating to watch millions of Americans believe the most ridiculous of lies from someone identifiable as the most notorious liar ever in a room full of them. Allowing yourself to be duped by your minister or your mother is understandable. Those types are so credible, so trusted, that they could say almost anything, and the predictable human response would be to accept it without question. But why would anyone believe the most over-the-top tale coming from someone with more documented lies to his credit than any other twice-impeached president in history? 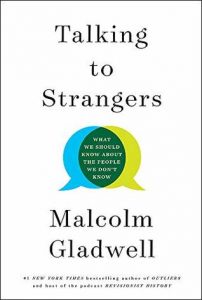 That leads me to another book I read post-election: Malcolm Gladwell’s, Talking to Strangers. In this book, Gladwell uses many recent controversies in pop culture as examples of how we misread people and why. In particular, he points out how humans tend to “default to truth,” or trust instinctively, when trying to evaluate who to believe or not. The absurd belief so many Trumpers have in the big lie on election theft can only exist when they desperately want to believe something, or anything that is more pleasing to them than the truth.

I insist that if Trump had thrown his enthusiasm and tweets behind mask-wearing in, say, July or August, more than 100,000 Americans who died would be alive today. A great number of anti-maskers would have defaulted to truth, believed their idol, and acted accordingly. Just like they are doing now.

We are living in a post-truth era. Too many of us default to a belief in some version of truth without actually seeking it. That laziness helps lies, big and small, become truth for too many. Peacefully living in a fantasy world is unhealthy enough, but violently defending the fantasy is, well, an unsustainable societal problem.

Stevens’ shows how the GOP platform has all been a lie. Gladwell shows how susceptible we are to believing the lies we are told. Put them together, and it explains Trumpism.

And now, America needs to write a new story.