A long drive on The Crooked Road, The Jitterbug, and a celebration of life

My favorite place to drive is through Cherokee country on The Crooked Road. Daniel Boone might have called it the Wilderness Trail. Sometimes I call it Bristol Highway or Gate City Road.  It’s even dedicated to a former Speaker of the Virginia House of Delegates named A.L. Philpott. But this guy was a segregationist and was one of the last politicos around that opposed designating Dr. Martin Luther King, Jr. Day a holiday.

It’s a beautiful winding road over the mountain stretch that I take from Cumberland Gap National Park to my older brother’s and oldest sister’s houses outside of Bristol, Virginia. The sun was shining and no one was on this state funded roller coaster Saturday afternoon. I was driving back to Indiana alone, so I took my relatively new Jeep for a ride that would have made my wife sick.

I was coming home from my mom’s funeral.

For the third time in the last five years, I have made a visit to St. Anne’s Catholic Church in Bristol for funeral services. My mom passed away Tuesday night and joined a sister and my dad in the church’s cemetery as their final resting place.

Forrest Gump said: “Mama always said, dying was a part of life. I sure wish it wasn’t.”

I am old enough and have experienced enough loss to know that dying also is an opportunity to celebrate life. And that’s what my trip to Virginia turned out to be for me this week. I got to celebrate my mom’s life through the life she gave to so many others.

Even though funerals are uniquely powerful in forcing these kinds of celebrations into our lives, there’s really nothing that prevents us from doing it more often on our own.

Let me give you an example or two.

I had not thought of it in years, but during Father Nick’s gospel, he talked about how my mom and dad loved to dance. They were well known for the way they could do The Jitterbug. 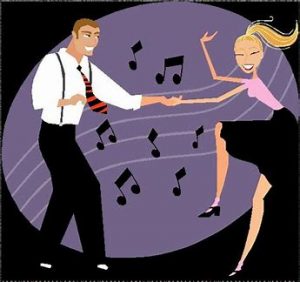 More than anything else, I vividly remember the looks on their faces when they danced.  My mom taught me how to do those ridiculous moves when I was about ten or eleven. I can also still see that ugly furniture in the living room of our old house in Abingdon, Virginia where I learned that step. I am also still thankful none of my friends ever knew about these otherwise humiliating lessons.

This week I got to hear a story of how one of my sisters did a back flip onto that ugly couch and broke the legs on it right after Dad had bought it.  She and one of my other sisters propped it up on a stack of books to hide their high crime until the couch slid off it’s artificial leg when my parents had company over several days later.  My dad blew a gasket.

What I’m sure was a horrifying rant from our father forty years ago, was a hilarious memory this week. It was funny enough to make the punishment worth it, especially for me, who was and still is completely innocent.

Back to the present, a steady stream of neighbors and friends stopped by my sisters house to express their condolences, and to drop off food. Fantastic food. Fantastic amounts of food. And this is my specialty: eating.

I can’t get over one gesture though. A couple of neighbors named Pam and Carlos made a couple of visits. The first time they stopped by the house, no one was home. They left a note in the kitchen. You are reading that note correctly. 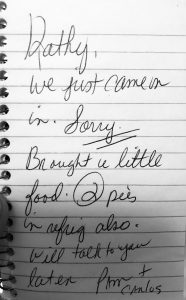 They let themselves in and brought some food and two pies. They brought it into the house and put it where it belonged, and came back later with a pot roast to go with it.

I’m not sure what to add to that. I wonder if I have any friends like that, but more importantly, I hope I can be that friend to someone else someday. The feeling of that sort of caring generosity might be impossible to duplicate.

My parents had seven kids and eleven grandkids. Four great-grandchildren were at mom’s funeral, and number five is due in June. Their legacies stretch from the Pacific Northwest in Washington to rural Georgia.

They certainly left their mark.

On leaving their mark, I want to make clear that my mom never spanked me. But she apparently did spank my two oldest sisters, at least once. It happened on a snowy winter day, and they had been bickering at each other outside. Mom came stomping out to teach these two a lesson by swatting them on their behinds.  I have two words that make this “incident” hilarious: snow pants.

It’s probably best my mom was not around to hear us laughing about this one.

It’s also a good thing she wasn’t with me on the ride home either. My parents hated State Road 58. There is a safer way to get there. Dad used to warn me about taking that route, and of course I did it anyway. It was fun rebelling one more time on this trip.

So much so, I plan on doing it again real soon.