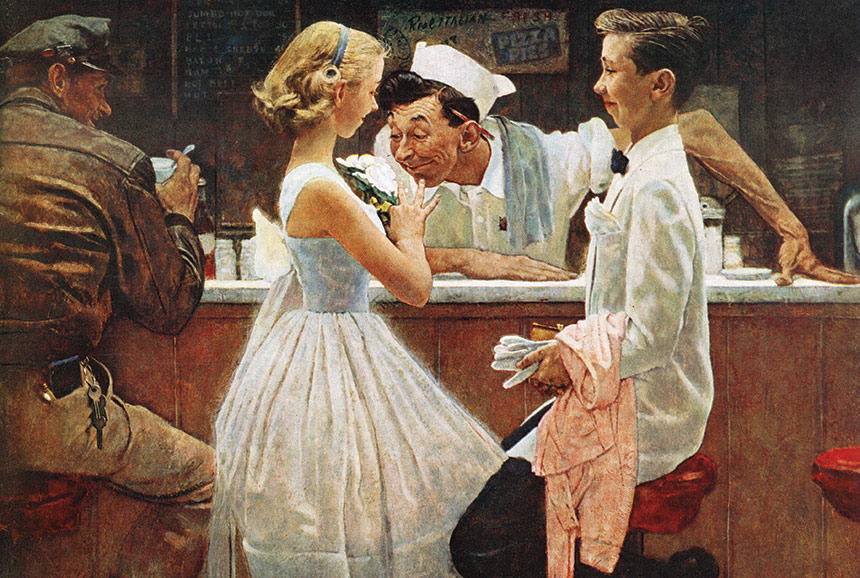 Imagine what Norman Rockwell would have painted had he been with us the last few years. The creator of the genre known as “normal America” might have been forced to fend off his brain exploding given the material America’s political culture has been serving. He could have helped us keep a clearer vision of what normal is or could be.

Much has changed since his passing in 1978, primarily what is considered normal. In a week full of news, it would be easy to overlook a couple of small things that aren’t all that newsy, but also struck me as definitely not normal.

In my line of work, I receive an abundance of political fundraising email. I’m on Senator Todd Young’s (R) email list and happily so, even though I don’t know how I got there. I appreciate knowing what he’s been working on, though I have not yet been tempted to write a check to his campaign.

In his campaign email of June 2, he complained about a speech Vice President Kamala Harris gave at his alma mater, the United States Naval Academy, on May 28.  He called her speech “humiliating.” He summarized the speech by saying she “lectured our next generation of warriors,” and that she wants to “turn the world’s greatest military into climate change fighters…more focused on enacting a socialist energy agenda than keeping America safe.”

Trouble is, this is not a remotely accurate description of what the vice president said in her speech. I wasn’t there, but I have read the transcript and I encourage every Hoosier voter to do the same. Why describe a predictable and appropriate commencement speech in such an incredibly disingenuous way? He doesn’t need to do that. I actually believe Senator Young has the instinct and ability to be better than that, but sadly, he chooses not to be. Scaring people of the other political party is more normal now, even when it seems completely unnecessary and unattractive.

Which leads me to the June 9 email from Senator Young. This one led with this description of a historically important Senate vote. “Last night, the U.S. Senate passed my Endless Frontier Act: the largest, boldest, most all-encompassing anti-Chinese Communist Party legislation to ever pass in American history.” I don’t know about all that, but I agree it’s a good bill. Young wants us to know how important S.1260 is, and that it was his bill. But he didn’t carry it alone. Yes, he led the way, but it passed because his partner on the bill was Senate Majority Leader Chuck Schumer. Why omit this important detail? Is it bad for fundraising to cut a deal with the evil Democrats? Apparently, Senator Young thinks it is.

Senator, you should be proud of the bipartisan work you did on S.1260, and the 68-32 vote it received. It’s not a bug, it’s a feature. Mike Braun, Indiana’s junior senator, should be explaining why he voted against your bill instead of you trying to leave out one of the best attributes of your work. But building consensus is the equivalent of depriving the angry masses of their grievances I guess, and that’s no way to raise money.

It used to be normal to make a deal like this, and since it isn’t anymore, your work on this one is special. As a Marine, you are among “the few and the proud.” In this case though, I guess you are just among the few. But I am still proud of you on this one. even if you’re not.

Late Thursday, it appears that a preliminary, bipartisan agreement has been reached on a new infrastructure deal. Young was not a part of it. I have thought for weeks that President Joe Biden should have sent Transportation Secretary Pete Buttigieg to collaborate with Young on this one. Two pragmatic Hoosiers in the right place and at the right time seem built for a mutually acceptable deal that most Americans want.

That too would have seemed normal to me. And given today’s abnormal political world, it would also feel special.

While reminiscing about what normal America once was, I came across “How to look at a Norman Rockwell picture” in the July 17, 2019 Saturday Evening Post. The David Apatoff piece pointed out Rockwell’s excellence in painting hands. I had not noticed it before, but look closely at the hands in all of his work. It proudly portrays hands that work, that have character, that have stories.

They’re American hands. Hands you shake. And shaking them is normal.