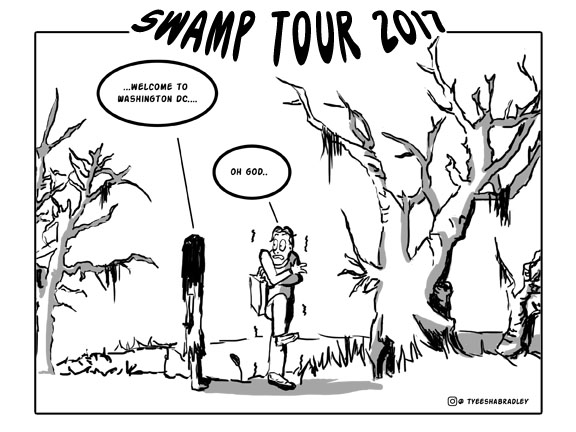 You may already know that I am no fan of President Trump. However, I have to admit his hotel in Washington, D.C. is awfully nice. Nice?  That’s not fair.  It’s lavish. It is framed in gold. It is probably wildly expensive. I am thankful I wasn’t paying for my one night stay.

Yes, I did stay there. I confess.

Many friends were disgusted by my sell out move. One friend, who is a Trump supporter commented to me “There are other hotels in D.C.”  As if I shouldn’t stay there because I think The Donald should have exclusively stayed in the hotel business.  I’m not following that logic. I was there with a conference so I have no idea what it cost. Maybe that alone would have driven me back to Marriott.

So let’s take a little tour of the place for fun.

No mistaking where these slippers came from, in case anyone thought about stealing them.

First and foremost, every American should be familiar with 45’s branding. And while I am not an expert on hotel branding, I am conceding that in pure volume, Trump International does more of it than any place I have ever been.  As an example, take a look at the robe and slippers.  I have no idea why the box wasn’t stamped with the logo–the box itself was nicer than any slippers I have ever worn.  Just saying.

A courteous listing of books available for Trump guests to continue their “spiritual journey.”

Maybe a little more intellectually relevant though was the little Trumpnote that came with the Holy Bible in the bedside drawer. I found it fascinating for a few reasons.  First, it seems far more spiritually inclusive than his political positions.  I think Muslim Americans would be happy to know that Trump hotels keep a copy of the Quran on hand. I did find out that the Talmud is rabbinic commentary, not exactly the equivalent of the Holy Bible. Though still a Jewish book, its volumes total approximately 6,000 pages.  I thought about testing it’s availability by requesting it, but that seemed a little disrespectful, even for me.

More Trump branding, but this time the company crest adorns the water bottle.

The entrances to the hotel are unfortunate though.  Two of them are not in use at all, presumably for security reasons. The one on Pennsylvania Avenue being closed is the most disappointing, since it also has the sign for the “Old Post Office” on it. This matters to those of us who could tell the building had been converted from something else, but didn’t immediately know from what. It’s a fabulous and historic structure and I’m glad it is being used well.  I don’t know what it looked like before, but I have heard from at least one friend who can vouch for its pre-renovation beauty. It is beautiful today as well, even with the Smurf-like lingo plastered on everything inside, including the water. Who knows? Maybe the company really has a mineral spring somewhere nearby.

This tour isn’t just about Trump International though.

I had an odd couple of phone calls while I was there. The first one came from a national media outlet doing a story about Vice President Mike Pence. Who knows why they call me on this stuff, but it was fun talking to this man about the Indiana experience with our former governor. Every time I give an interview about him, I wish I could listen to a tape of the conversation and make sure I didn’t say anything disrespectful. My filter is not always at full strength. This story has not run, so I have no comment on which publication it is.

The next day, while still in Trump International, the second call came from a different national media outlet.  Abigail Tracy’s piece in Vanity Fair  reads with sad familiarity to Hoosiers. I wouldn’t change a word of my quotes, and many folks around here have heard it from me before. For America’s sake though, I’m glad she wrote it. I have written and spoken about our VP many times, but I admit it was odd giving these interviews from that particular hotel.

We named this dog Longworth–after the building of the same name, which is named for former Speaker of the House Nicholas Longworth.

The Swamp Tour included some time on the hill too.  That’s Capitol Hill for you Schoolhouse Rock fans. It’s been a while since I visited Longworth House Office Building, and as much as things haven’t changed, a few have. One weird thing was coming across a loose dog in the building.  He might have been a little Cocker Spaniel, or maybe a Maltese. I didn’t get any ID from him, but he appeared to believe he owned the place. If he wants to own it, I bet he could get a good deal right now.  I kept thinking Henry Holcomb, aka @FirstDogHenry would enjoy a little race in the hall with this guy. We should arrange that.

Rep. Nunes office was near the dog’s turf, and only a few doors down from the Ethics Committee office.

Right around the corner from this unidentified canine was this office door.  Where the hell has he been these last several weeks?  The last time I was in the building was before he got elected. Since then he has risen to a chairmanship, served on a presidential transition team, and recused himself into deep hiding apparently. Keep an eye out in case he resurfaces.

Lastly, I walked into an old school cocktail party and a friend yelled at me to “get in the picture!” So I did. After it got snapped, I introduced myself to the tall guy next to me.

I said, “sorry about that, my name is Mike.”  He said “no problem, I’m Duncan.”  Turns out that’s Congressman Duncan Hunter.  A Republican from California’s 50th District. The 50th?!  Indiana has nine districts.  California has 53.  But who is counting.

After all of this unimportant information there are a couple things that were noticeable during my trip.

The healthcare bill died this week. The president threw some notable shade on some important folks, starting with the Attorney General he appointed, Jeff Sessions. It happened in another “wow” interview with a newspaper I can’t believe he even allowed in the Oval Office: the New York Times. His  lack of discipline or grasp of rationality is truly remarkable.

And Mike Pence spoke inaccurately, which is the kindest description I can give, about Medicaid. He knows what he said was wrong just like everyone else who is paying attention does.  This “mistake” led to the interviews and stories mentioned above.

I have never seen our nation’s capitol as paralyzed as it is right now.  My first trip to the hill was during the Clinton impeachment timeframe.  That was nothing compared to this mess. For any Trump supporters still reading this, I encourage you to actually read conservative columnists only for the next couple of weeks.  The things some of them are writing in outrage of this government right now should be enough to give you pause.

I do love D.C. It is where the action usually is for a government, politics and policy wonk like me.  That action is hard to watch right now, and not just for me.  It actually is a bit of a swamp, but not the way many people think.  The good people there are covered in a new kind of sludge.

Only a new kind of leadership will be able to clean it up. And though I love it there, I can’t tell you how good it feels to be home.