The MAGA flags and hats are now symbols of insurrection 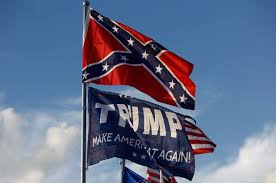 Take the yard signs down. Put that magic red hat back in the closet. And for the love of America, get rid of the Trump flags. It no longer matters what those symbols may have once meant to you. It is more important what they mean to the rest of us now.

It is ironic how “Make America Great Again” paraphernalia actually communicates hostility for, you guessed it, America. Just like the confederate flag and the swastika have symbolized for much longer, MAGA symbols mean the same set of things. I have thought this for quite some time. But as the last gasps of breath are exhaled from the life of the one and only Trump term, MAGA flags flew over a violent insurrection at the U.S. Capitol on Wednesday.

So, that is now what they will always be: symbols of rebellion, of unfettered and unlimited grievance. While they had become a familiar annoyance, they have now solidified their place in the hall of shame right next to the Dixie and Nazi flags. Congratulations.

The magic red hats have always been ugly. If those hats had been the standard uniform at a rival school or sports team, we would make relentless fun of their lack of fashion sense or coolness. If they were blue and white pin stripes, they would look like part of an old train engineer costume, and would certainly not help anyone looking for a date.

But the flags are something altogether different, and there’s nothing funny about them. Flags were originally used mainly in warfare. They continue to be provocative in a way that is different than a bumper sticker or a t-shirt. They express an elevated sense of enmity.

I get how these differences are a little like debating the virtues of Twitter versus Facebook. However, the point about MAGA symbols is now effectively moot. After the events of this week any visual tool that announces one as a loyal Trump supporter going forward is an announcement of hatred of America and Americans.

It is no longer meaningful for anyone to say to me that I need to listen to these people, and that I need to work harder to understand them. No, I got it. Their perspective isn’t really that complex, and I really don’t care about their feelings all that much anymore. I have been listening and reading the grievances for five years now. Trust me, I got it.

Their gear reminds me of the sashes The Cowboys wore in quite possibly the greatest Western movie of all time: Tombstone. Wyatt Earp and Doc Holiday defeated those sash-wearing gangsters in the end, of course. The other images that come to mind are ones of the L.A. street gangs of the 80’s and 90’s. The red of The Bloods and the blue of The Crips made for good theater for those not living in those neighborhoods. For the innocent victims of the violence that came with that drama, the colors likely stir much different and profound memories.

Corinthians reads: “When I was a child, I spake as a child, I understood as a child, I thought as I child: but when I became a man, I put away childish things,” Sporting the MAGA gear is intensely childish.

When I was a teenager growing up in a small town, I pierced my ear and wore a variety of some fairly pitiful looking decorations that could barely even qualify as “jewelry.” Back then, that pierced ear of mine was a sign of rebellion. It sure wasn’t pretty, and it never got me a date either. These days, it would hardly be noticeable, though equally pitiful.

The MAGA gear is a little like the small town earring of today. Ten years from now, those wearing or flying it will look back and be at least a little embarrassed. Do yourself a favor, learn from my example and put your diamond studs away.

If you just can’t quit the gear cold turkey, start with the yard signs, then the hats, and then maybe you can muster the strength to ditch the flags. For a short while longer, we will only tolerate your sycophant-gear-addiction in the form of a socially distant, MAGA mask. Deal?