Trudeau vs. Trump: North America’s mini-battle for our hearts 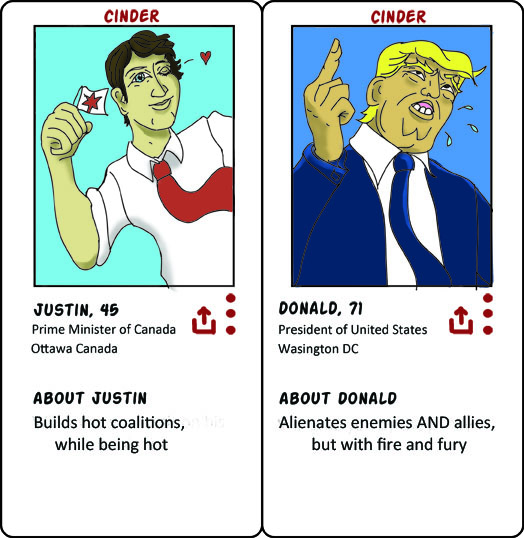 I have met an abundance of interesting people in recent years. Virtually all of these acquaintances have occurred accidentally for one reason or another, and whether they were a pleasure or not, I appreciate them all.

Enter my new friend, Stephen Rodrick. He is a freelance writer who I met last year while he was working on a detailed piece on Vice President Pence for Rolling Stone. We got connected on Twitter and have stayed in touch. That has been fun.

He thinks I’m ruthless toward a couple of Indiana coaches, one of whom is about to start his season, another who was recently fired. Conversely, I think Rodrick might be a nightmare to travel with judging by his commentary specific to that, but on the other hand, he does it more than I do.

In any case, I read what he writes. And he is damn good at it. Case in point, his recent story on Canada Prime Minister, Justin Trudeau. Read it. And when you do, read all of it.

The piece disturbed me a little. Not out of envy of our neighbor to the north for having a leader who aligns with me ideologically. And not because Canada’s political landscape is more settled and steady than ours is today. I’m not even sure that it is.

It disturbed me because of the contrast that exists between our nations’ leaders. I believe my disturbance is actually not as much about policy as it is about delivery.

Read Rodrick’s description of Trudeau, and imagine the liberal policies he champions were replaced with the typical conservative counter stances. But keep his compassion. Keep his desire to be a part of making life for all Canadians better. Keep his clear need to inspire young people in particular.

Wouldn’t those qualities be nice to have in a leader? Regardless of political party?

Historically, that is exactly what America has had. The biggest shock to my system since January has been our leadership’s departure from decorum. The abandonment of any apparent commitment to simple things like manners, and more complex things like governmental procedure, set the stage for the abandonment of even more precious virtues later, I fear.

In Canada, I’m sure there are some who wish Trudeau would speak tougher from time to time, but he generally isn’t scaring those people when he doesn’t. He certainly isn’t endangering his country by choosing his words strategically. And there are no mothers in crowds putting their hands over their children’s ears when he speaks. Scouts Canada probably feels pretty safe with him at the podium.

None of this is to ignore the fact that he is far from perfect. His support is far from unanimous.

I spent a little time with a Canadian retiree this week named Al, and I asked him “what do you think about PM Trudeau?” He said “not much.” I thought I had found an opponent, but only for a moment. It took a little prying, but Al went on to say that Canadians will judge Trudeau on what he does for each of them individually. But that it was Trudeau’s dad who was the bad one. “He really screwed us,” Al said. Canada’s “second class” highway system is the issue on his mind.

Aah, infrastructure. I remember how important that is for government to address. Indiana’s leadership, as a good example, seems to be able to keep its eye on that ball.

And don’t forget, there are conservatives in Canada also. Some of the hostile and downright vulgar feedback that my new pal Rodrick got on his Rolling Stone article is what led to my interest for this column. He told me about some Scaramucci-esque suggestions he got from the far right that my wife won’t let me repeat here, in a display of complete disregard for how hilarious some of these suggestions are.

But he did share this about Canadians in general: “Living in the shadow of the United States, they are extra prickly about what Americans think of them and have a chip on their shoulder if someone comes in and offers an outsiders’ opinion. It’s kind of like the fans of a hipster band, if you weren’t with them from the first single, there’s no possible way you could understand them.”

There is a calmness today in the Great White North though. Canada is simply a calmer place than America. But Americans underestimate the diversity of its culture. We also may underestimate some of its governmental and political challenges of recent decades, particularly those faced during Pierre Trudeau’s tenure.

Stephen Rodrick’s piece about Canada’s young leader made something clear to me. My thought that the leader of a nation must be compassionate, thoughtful, and that he or she must possess an unquestionable love of country and its people are all prerequisites for the job. Policies and politics aside, there simply is no way around these things.

The second answer I got from Al when I asked him about his nation’s leader was quick and came in the form of a question. He curtly snapped: “what about your guy?”

Great question. Thank you Al. Your concern speaks volumes to me.